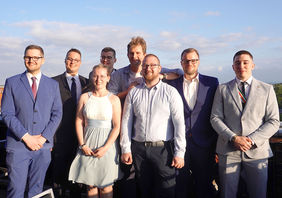 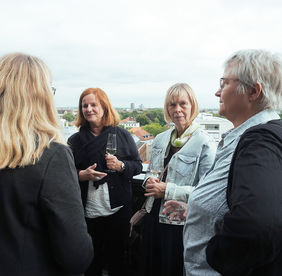 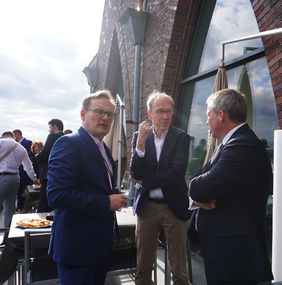 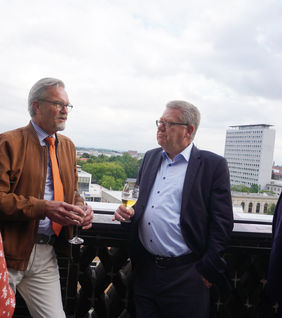 Get-together above the roofs of Braunschweig 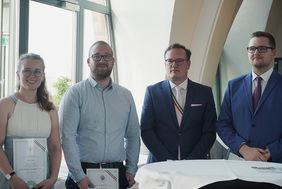 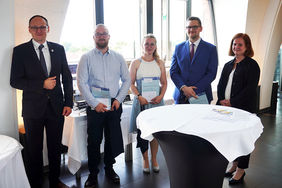 Dr. Josef Rampl, Managing Director of the Sponsoring Association, and Gaby Lühr, DMSB (left and far right in the picture) present the Milling Pension Fund Prize to the graduates with the best average grades in their final exams: Markus Bröer, Maren Sting and Jeffrey Freiter.

For this year's DMSB graduating class, July 8, 2022 was a special day: during the graduation ceremony, one female and eight male graduates received their certificates and decorative leaf diplomas. About 60 guests attended the event at the LaCupola restaurant in Braunschweig.

At the beginning of the evening program, principal Jörg Gerling welcomed the guests, after which pedagogical director Georg Böttcher and the entire faculty handed over the long-awaited graduation documents. The course of study at the DMSB to become a "Technician for Mill Construction, Grain and Feed Technology" now also concludes for the second time with the international title "Bachelor Professional in Technology". In addition to their studies at the DMSB, seven of the students also successfully faced the Master Examination Board.

The city mayor of Braunschweig, Annegret Ihbe, was also present and reminded the students that Braunschweig is not only a good place to study, but with its numerous scientific, cultural and sporting facilities, it is always worth a visit in the future. This was followed by the greeting of Alexander Schnelle, chairman of the sponsoring association, which actively supports the DMSB. He encouraged everyone present to join the association.

For several years now, the Milling Pension Fund has been awarding cash prizes to the three students with the best average grade in their final exams. Maren Sting, Jeffrey Freiter and Markus Bröer were delighted with the prize money. These three students also formed the team that produced the best project work, for which they were also awarded the Karl-Heinz Gericke Prize of the "Glück zu“-fraternity for the best-graded final paper. The subject of their project was the planning of a grain cleaning system in a warehouse. Praising these three and all other graduates was Michael Kammann, president of the fraternity "Glück zu", who in his following speech emphasized the successful cooperation of the fraternity, the sponsoring association and the DMSB and the advantages of this worldwide network. Finally, Michael Kammann thanked the four students who are now leaving the presidium. These were again the students already mentioned by name and Leonard Sökefeld.

Jeffrey Freiter took the floor on behalf of the graduating class and recalled the numerous events and school trips of the past two years. He concluded by characterizing each member of the graduating class both aptly and humorously and thanked all faculty and staff at DMSB. Afterwards, the social part of the evening began. Once again, the event was a wonderful finale – as always with one laughing and one crying eye: on the one hand, with joy at having successfully mastered the past two years together and, on the other hand, with regret at having to say goodbye to each other. 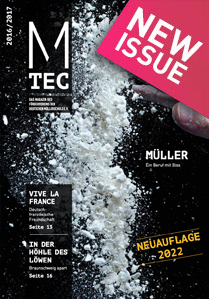 Please fill in the form in order to subscribe: